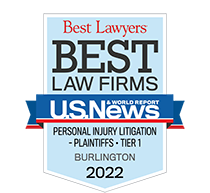 BURLINGTON, VT — Two Vermont residents, husband and wife, recently settled a medical malpractice lawsuit for $2,375,000. Christopher J. Maley, represented the plaintiffs. The lawsuit was filed against a Vermont primary care practice group. The plaintiffs alleged a delay in the diagnosis of prostate cancer, causing a loss of life expectancy, pain and suffering, loss of consortium, lost wages, and medical costs.

At times relevant to the case, the majority of medical organizations recommended that patients in their fifties be advised annually of the risks and benefits of digital rectal examination (DRE) and Prostate Specific Antigen (PSA) test as a means to screen for prostate cancer. An abnormal DRE or an elevated PSA blood test may lead to the early diagnosis of prostate cancer in asymptomatic men. The goal of these tests is to diagnose the cancer while it is confied to the prostate, when treatment is most effective. Since the advent of PSA screening, prostate cancer has been diagnosed earlier with a higher rate of organ-confined disease, and the overall prostate cancer death rate has declined. The risk of prostate cancer rises dramatically when men reach age 50.

Husband was a patient at defendant primary care office from 1995 to 2003. During that time period no physician advised husband of the risks and benefits of prostate screening by DRE and PSA. In 1997, husband turned 50. That year, he underwent a complete physical examination, including a DRE. Despite subsequent visits several times each year ot the office, another DRE was not performed until six years later in 2003.

Defendant primary care physician referred the plaintiff to urologist Mark Plante, M.D., in Burlington. Plante performed a biopsy which confirmed the diagnosis of cancer. All six pathology samples were positive and classified as a Gleason grade 8. (Gleason grades are scored 1 to 10, with 10 being the most aggressive. A Gleason 8 suggests an aggressive and high-risk cancer. The parties' experts agreed that Gleason 8 cancers carry with them a poorer prognosis than most prostate cancers.)

Plante order a bone scan which revealed that the husband's cancer had metastasized throughout his skeleton. Plante advised the plaintiffs that it was too late for surgery or radiation aimed at curing the disease. Husband was 57 years old.

For the next two years, husband underwent hormonal therapy, radiation and chemotherapy. The treatments were primarily palliative, as skeletal metastasis is extremely painful. Husband suffered terrible side effects from the aggressive treatments.

At deposition, defendant primary care physician admitted that he was negligent in his failure to perform a DRE and PSA around the time of the administration of testosterone. He further admitted that the practice group's failure to perform a digital rectal examination for over six years, and its failure to insure that its doctors annually discussed the risks and benefits of prostate screening with husband represented departures from the standard of care.

Plante, husband's treating physician, testified as an expert for the plaintiffs. He was of the opinion that had the PSA and DRE been performed annually during husband's fifties, or had such annual screening commenced at the time of the testosterone administration, the cancer would have been diagnosed three to five years earlier. Plante opined that if the plaintiff had regular DREs and PSAs his cancer would have been diagnosed while it was clinically confined to the prostate, and he would have been a candidate for radical prostatectomy or radiation. Plante believed that timely diagnosis would have likely resulted in husband living 10 to 15 years from the date of his diagnosis. Husband's other expert, urologist Raymond Maddocks, M.D., testified that had the defendants appropriately screened husband he would have enjoyed a normal life expectancy.

Defendants raised the defense of comparative negligence, claiming that husband should have known to schedule his own annual physical examinations, and that if he had done so, his physicians would have raised the topic of prostate cancer screening.

Defendants also strongly defended the case on causation grounds. Defendants' expert, Paul Unger, M.D., and oncologist who practices in Colchester and has privileges at Fletcher Allen Health Care, contended that the negligent delay in diagnosis did not cause a loss of life expectancy or the other damages. He testified at deposition that due to the particularly aggressive nature of husband's prostate cancer, even if it were diagnosed earlier, and even if husband underwent a radical prostatectomy or radiation, the cancer would have metastasized. Unger testified that the findings of widespread metastatic disease at the time of diagnosis and a PSA of only 15.76 when one would have expected a much higher number, indicated that the cancer was "poorly differentiated." This finding, coupled with a Gleason score of 8, was evidence that husband had a particularly aggressive type of cancer. Unger acknowledged that the cancer would have been diagnosed earlier had husband undergone routine DRE and PSA, but he still believed that husband's prognosis would not have improved.

Defendants' other expert, urologist Zachary Passaretti, M.D., testified that one could not state to a reasonable degree of medical certainty that had screening taken place that the cancer would have have been diagnosed prior to it spreading outside the prostate. Passaretti testified that the plaintiffs' experts' opinions were speculative. Defendants' experts emphasized that PSA is a controversial and imperfect test and that there are no prospective, randomized studies which provide that it provides a mortality benefit for the population as a whole.

By the time of mediation, husband's short-term prognosis was poor. The parties medicated the case before Rutland medical malpractice lawyer David Cleary. After a full day session, they were able to resolve the case. A condition of the settlement is that names of plaintiffs, defendants and defense counsel are confidential.

Maley told Vermont Lawyer that his clients hoped that by bringing this lawsuit that they would raise awareness regarding prostate cancer screening. They hoped that future patients would not slip through the cracks and that more men would be diagnosed with early stage disease. "They were pleased to hear that as a result of this lawsuit that the defendants changed their practices with respect to tracking and performing PSA tests and digital rectal examinations," Maley said, adding that this case serves as an example of the medical malpractice system improving the quality of care offered to patients.